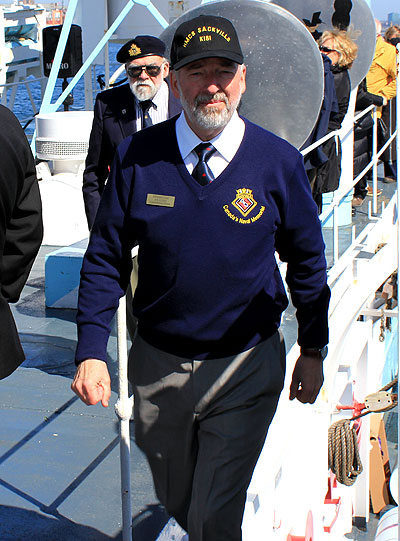 As a recurring feature of this website, our Foundation will occasionally honour someone we judge to be a Canadian Maritime Heritage Hero, an individual who has contributed in important ways to the preservation, interpretation, celebration, or creation of the rich maritime heritage of our provincial, national, and global communities.

Jim Reddy was a remarkable person: intelligent, practical, reliable, generous, funny, dignified, and absolutely dedicated to doing everything in his power to foster an appreciation of Canada’s maritime and naval heritage. He was a person of quietly passionate commitments who consistently lived his commitments with remarkable integrity.

Our Foundation is proud to honour him as our first Canadian Maritime Heritage Hero.

Jim joined the Royal Canadian Navy through the ROTP program in 1965. He served in ships of both the Atlantic and Pacific Fleets, with shore postings in Halifax, Esquimalt, St. John’s and NDHQ in Ottawa. He finished his naval career as the Queen’s Harbour Master in Halifax in 2003.

After retirement from the Navy, Jim threw himself into volunteering with naval veterans related activities. Beginning in 2003 and for over a decade and a half until his untimely death in 2019, he and his wife Pat Jessup were an inseparable team, joined in their commitment to the promotion and celebration of Canada’s naval heritage.

Most recently, until his untimely death in 2019, Jim was the Captain of HMCS Sackville, Canada’s Naval Memorial, a position he held with pride and considered it to be an important way he could give back to our community and the veterans of the Second World War.

Jim was a genuine people person who built strong bonds of friendship and collaboration with those of us involved in the preservation and celebration of our connection with the sea.  He was a good listener and a wise advisor. He was an active, committed, generous volunteer with such groups as the Canadian Naval Memorial Trust, Tall Ships, the Convoy Cup Foundation, the Royal Canadian Naval Association, the Friends of HMCS Haida, and the Company of Master Mariners.

Jim was a strong supporter of both Canadian and Norwegian Merchant Navy veterans and when the vets themselves became too old and few to organize their annual remembrance ceremonies, he and Pat picked up the torch and ensured that these events, so critical to the soul of our maritime heritage community, would carry on.

He was a Patron of the Canadian Maritime Heritage Foundation and an enthusiastic friend and supporter of the Maritime Museum of the Atlantic. He was the rare sort of person who had a quiet knack for turning up just when help was needed and lending a willing hand or a sympathetic ear.

Jim gave of himself generously and unstintingly. Our community is richer because of his contributions to the preservation, appreciation, and celebration of our maritime and naval heritage.

Quite simply, he was a true Canadian Maritime Heritage Hero.